Most U.S. citizens or green card holders who have offshore 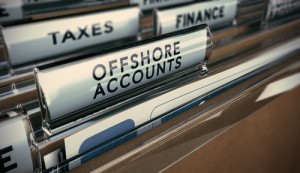 banking accounts are by now aware of the potential financial and even criminal exposure they may face with non-disclosure.

The IRS has posted general information on what they call the Abusive Tax Scheme Program (tax avoidance), which outlines the many areas they are focusing on in collecting taxes owed due to the many schemes that continue to be used to hide offshore income and assets. According to the Wall Street Journal, the associated Foreign Account Tax Compliance Act (FATCA) has garnered a handy 5.6 billion by mid-2014 from close to 50,000 taxpayers. This figure will continue to mount as more and more category 2 banks of the Department of Justice program come in line.

Areas of Concern for Expats

Should you have undisclosed foreign accounts, for example in Switzerland, you need to make sure that your Schedule B, 8938 and FBAR disclosures are consistent since the IRS does a triple matching on these. The respective bank(s) will send a W-9 Form to your address listed on the account, which you need to file with them or become considered a recalcitrant client by the IRS, who will then begin an audit of all your financial accounts and records. The banks are also required to withhold 30% of the bank balance if they don’t hear back from you.

If you do not have foreign accounts and need to open one (e.g. after recently having moved abroad), you may find that many banks are no longer willing to open an account for U.S. citizens. Find out from other expats in your country of residence how and where they’ve managed to open and hold an account.

If your bank has failed to submit a timely letter of intent to participate in Category 2, such as BSI of Lugano, Switzerland (now paying a fine of $221 million), your potential penalty may jump from 27.5% to 50% overnight as was recently the case for that bank’s several thousand U.S. clients. Five Stone Tax Advisers urges such persons to come forward as quickly as possible by first engaging in a free, confidential 30-minute assessment of their case.

Many expats are still flustered by the demanding FATCA requirements and their potentially costly implications. Permanent expats could be forgiven for resenting the worldwide reach of the IRS and blaming Congress for FATCA. But it’s not only these acronyms that can cause grief.

The European Union has realized that international tax transparency and reporting is not all bad. In following the U.S. lead, European member countries along with the other OECD members from across the globe are about to implement the CRS (Common Reporting Standard) set out by the OECD. This new and single standard for automatic exchange of financial and tax-related information, approved last year, will make for substantially increased international tax transparency affecting citizens from all OECD countries including most of Europe. U.S. expats can take some comfort that they are not the only ones affected by what started with U.S. pressure on Switzerland to lift its bank secrecy. Similar rules will soon be implemented worldwide.

The other issue affecting many expats is the fact that they have been asked to give up their offshore accounts since tens of thousands of FFI signatory banks (Foreign Financial Institutions) are no longer willing to carry the onerous tasks associated with maintaining U.S. client accounts and the extensive and costly reporting requirements associated with this. One of the lesser known reasons for this, in addition to FATCA, is the EU-adopted AIFMD (Alternative Investment Fund Managers Directive), which some blame to be the main culprit for such circumstances in the European market.

Combined with regulations emanating from the SEC and the Dodd-Frank Act, fund managers are now much more tightly regulated than ever. This is the main reason why Americans are finding it very difficult to maintain or open accounts offshore, unless they have a million dollars or more to invest in a given institution. Swiss banks will still accept such customers, but in recent years have felt moved to set this high bar for the above reasons.

So What's the Good News?

There is also some good news that will alleviate offshore banking headaches keeping you up at night. Penalties for unintentional non-declaration of offshore accounts were lowered last year while they increased significantly – to 50% of the total balance in non-disclosed accounts – for willful tax-avoidance. The tricky thing is that the IRS gets to decide whether a case is unintentional or not, so it is essential to have your case thoroughly reviewed by a team of professionals before the IRS gets a look at it.

One of the unintended side-effects of FATCA is that thousands are giving up U.S. passports and green cards every year. The IRS or U.S. government may not be so concerned in light of the garnered revenue, but it’s clearly one of the darker sides of this congressional act we have to acknowledge. It is a reality that has made sense to thousands of expats yearly who have made their homes offshore and have chosen this extreme path.

Our intention with this information and other blog entries is to help affected persons obtain the best possible outcomes realizing that their situation is not unique but becoming very widespread. We can help put their minds at ease that by voluntarily complying and following a well-prescribed process with the proper professional advice, they can minimize risk and come clean as painlessly as possible.